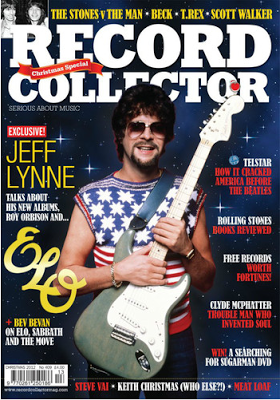 ELO is the cover story and Jeff Lynne is gracing the cover of the December 2012 Record Collector Magazine in the UK.  Two full articles about ELO - one from Jeff Lynne:


Two albums released on the same day saw Jeff Lynne break a lengthy silence. Terry Staunton meets up with ELO’s head honcho and asks just why he had to hide away for so long.

The Top 10 albums chart in late October made interesting reading, with a familiar name dominating the list. One of the highest new entries was Long Wave, a collection of vintage oldies from the 50s and 60s refashioned for the 21st century by Jeff Lynne. Just below it was Mr Blue Sky, with Lynne revisiting some of his old band ELO’s best loved songs, re-recording each one from scratch. A few places below those offerings was a catalogue compilation of ELO originals, sales reignited by the buzz surrounding the front man’s return.

Not that Lynne has ever been away, he’s just been out of the spotlight. Since the demise of ELO in 2001 (having fought and won a legal battle for rights to the name from drummer Bev Bevan’s touring outfit ELO II), Jeff has mostly worn his producer’s hat. He worked on George Harrison’s last album, Brainwashed, continued his long association with Tom Petty, and his name can also be found on the credits of releases by Regina Spektor and Joe Walsh.

He was involved in the Traveling Wilburys reissue campaign in 2007, which saw the supergroup that also featured Harrison, Petty, Bob Dylan and Roy Orbison top the album charts again, but releases with his own name front and centre have been conspicuous by their absence.

The other article is on Bev Bevan...


The strings soared, Jeff Lynne delivered the hits, but the foundation was Bev Bevan, driving it all behind the drum kit. Here, he recalls his times with The Move, Black Sabbath and ELO. Matt Eastley snares him for an interview
Sometimes, what looks on paper like the dream ticket simply fails to come off.

The metamorphosis of Birmingham band The Move into the Electric Light Orchestra and the subsequent failure of the Roy Wood/Jeff Lynne partnership is one of the more curious tales in rock’s annals.

The Move had been one of the finest bands to emerge in the late 60s, largely driven by the creativity and inventiveness of Wood.

But come the 70s, the band was struggling for direction and when close mates, mutual admirers and stellar talents Wood and Lynne finally hooked up, they looked set to take the world by storm with a vehicle that would satisfy both their ambitions.

But as far as the pairing was concerned, it never happened, and within a year, Wood had stunned everyone by upping sticks and leaving to form the complex but often-amusing and parodic Wizzard.

Watching all this at first hand was drummer Bev Bevan, who had known Wood since the mid 60s. To this day is flummoxed as to why the Wood/Lynne axis did not flourish.

On newsstands in the UK but you can also order one right from Record Collector's website...
Posted by Jerry at 8:20 AM