I GUESS IT WORKED. I BOUGHT ONE.

How many ways can you recycle and remarket ELO CDs?  From Sony/BMG's Custom Marketing Group comes this: a 2CD collection of previously released budget compilations smartly titled 2CD Collection (A 712251).  They're the same discs released in the early 90s: ELO Classics and Burning Bright.  They're not remastered and retail for about $10. 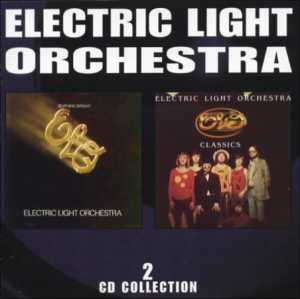 A FEW WORDS ABOUT THESE WORDS

After giving it a day to soak in, a thumbs up for Rossif Sutherland's These Words.  A nice and understated little tune.  The uh-huh's in the verses grow on you.  Funny, some of his new songs have been up on his MySpace page since at least September.  Hopefully, the wait for the entire CD won't be long now.

It just kinda occurred to me, this is the first Jeff-related studio track that didn't involve ELO, Wilburys or Beatles in ages.  His stuff with Rosie Vela was never released and probably won't be.

THE FOLLOWING HAPPENED BETWEEN 2:00AM-3:00AM TODAY

Showdown, The Official ELO Mailing List has taken the wraps off this rather exciting news tidbit.  Rossif Sutherland, the brother of 24 star Kiefer Sutherland, is releasing an album (perhaps by the end of the year) with three songs produced by Jeff Lynne.  A rough mix of one, These Words, is available to hear on his MySpace page.

It's a nice simple little tune and as with many Jeff Lynne productions, the devil's in the little details: a laid-back style with some nice sounds.  A cleaner version will flush those details out.  As awlays, it's great to hear something new coming from Jeff's corner.

Makes me wonder how far (if at all) Jeff is working towards an album of his own songs again.