APRIL IS GETTING EXPENSIVE 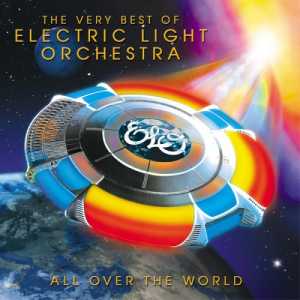 The April re-issues are beginning to pile up for collectors.

Tuesday is supposedly re-issue day for Ole ELO.  Later in the month, a budget version of ELO's Out of the Blue is due along with Japanese mini-LP editions of Dave Edmunds' Information and Riff Raff.  Now comes word from Amazon that All Over The World: The Very Best of Electric Light Orchestra will be released on a gold disc edition on or around April 22.

Also, Face The Music Online should be going live this week with specific details and ordering info for the Move's Looking On.

This didn't get much play in the MSM today, but the Beatles' long time partner and EP of the incredible Beatles Anthology, Neil Aspinall passed away on Sunday at the age of 66.
Posted by Jerry at 12:23 AM No comments:

And you thought ELO Part2/The Orchestra was the only legal drama with ties to Electric Light Orchestra.  The ousted head of an ELO tribute band (and Jeff Lynne impressionist?) wants what he feels he's entitled to: 1,000 British Pounds.

OUT OF THE BLUE 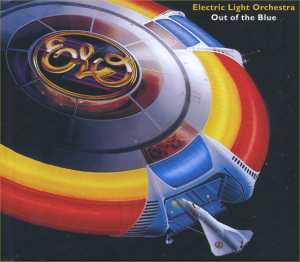 ELO's Out of the Blue is being re-issued in the US as a budget release on April 29.  Another link here.  No details on this yet, but retail price (like the upcoming Ole ELO set) is a mere $6.99.  Could this be similar to the UK, where Out of the Blue was re-released with carbon neutral packaging?

MINI-LPs IN A DISCOVERY BOX 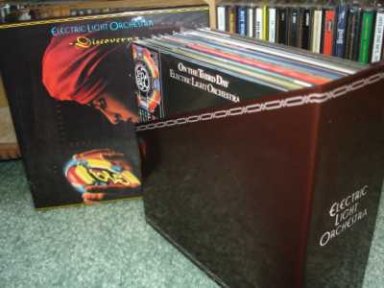 A new round of ELO Japanese Mini-LPs are just released and this tme the complete set of CDs (On The Third Day, Eldorado, Face The Music, A New World Record, Out Of The Blue, Discovery, Time, Secret Messages and Balance Of Power) are housed in a promo glossy, hard-bound slipcase box with Discovery artwork.

From what I can tell, there are no differences with the new pressings of the mini-LP CDs themselves.  Some mini-LPs are turning up on eBay with album artwork used as the disc design.  Use caution if you order one of these.  I've been discouraged from buying anything from the "Russian Federation" because they could be fakes, so I've held back.  If you do get one of these Mini-LP CDs with album art on the disc, write me (bflat33@aol.com) and tell me whether you believe they're official or not.

Back to the topic, the set with all 9 titles is expensive, roughly $200 or more.  But if you haven't tried the Mini-LPs from Japan yet, this might be a good starting point because the Discovery slip box is incredibly well made.  If you already own the first edition Mini-LPs, then you're just getting a nice box. 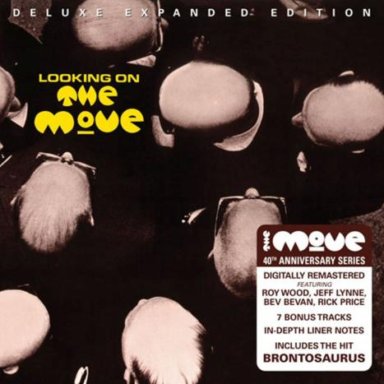 Play.com is the first to show the track list for the 2008 edition of Looking On.  Clearly, the last hope for the unreleased Jeff Lynne song Falling Forever is the upcoming Move box set.

The Japanese Mini-LP CDs have now extended to Dave Edmunds.  Five of his albums (two with some help from Jeff Lynne) have been re-remastered and will be available as Cardboard Mini-LP editions in Japan beginning April 23.

Information (1983) and Riff Raff (1984) feature seven produced by Jeff Lynne tracks in all and according to the description, have been remastered using JVC K2 24bit remastering.  It, however, doesn't list which record company is releasing it or which cover art they'll be replicating.  Both Information and Riff Raff have different artwork between the UK and US.

LOOKING ON IS LOOKING UP...

Pre-order links for the 2008 edition of Looking On by the Move are beginning to appear.  One here and another here.  Others are sure to follow.

The CD has 14 tracks, seven of those tracks will be bonus material and (as with the previous 2 Move remasters from Salvo) expect additonal bonus material online.

Street date is listed as April 15, which is a Tuesday.  But this may be a UK import, so this will probably be released on an adjacent Monday.