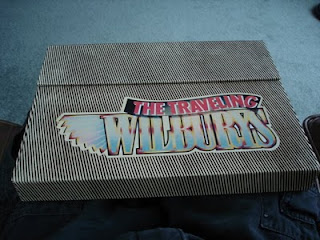 Yes, $600 is excessive for a book and you can bet this particular one will not be propped up next to the encyclopedia set.  Yes, I still have a encyclopedia set.
Genesis Publications shipped this book as you would expect for that kind of money: (ahem) carefully.  It's wrapped in custom brown paper exactly like the original Handle With Care single, and held together with a 'Handle With Care' sticker. The deluxe edition box is as described, fully encasing the entire book and clasping closed magnetically.  Nice start.
Now, for double the price of the Collectors Edition, you got a faux leather book cover, the fully encasing book cover with felt lining, and an 8x10 color photo of the Wilburys with the signatures of all 5 embossed at the bottom.  Is it worth the jump in price?  Well, I'll let you all be the judge.  The signed copies from Jeff were actually cards that were glued into one of the front pages.  There are other glued cards in the book, so I suppose that was a good way to do it.  I had this mental picture of dozens of boxes in Jeff's living room filled with books for him to sign. 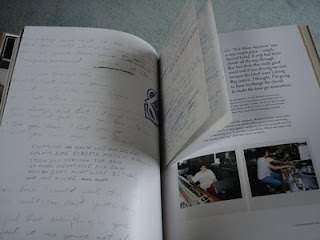 The book content of both versions is apparently exactly the same.  That turns out to be a good thing.  The book layout is good for jumping around as opposed to reading it cover to cover.  If there's anything the Traveling Wilburys Collection DVD documentary left off of the Wilbury story, it's in the book.  Replicas of sheets of paper with lots of unused lyrics and studio notes are bound between the pages.  An interesting idea I've not seen before.  Then again, this is my first multi-hundred dollar book.  There's even sketches and drawings for album and single artwork ideas, some were ultimately not used. 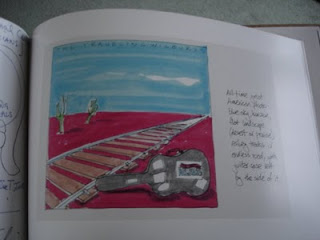 You get a better sense of how these guys put these tracks together.  Some of these songs took more twists and turns than we were probably aware.  Would I have liked for there to be a 4 track CD inside with some of these later abandoned ideas for Margarita and Not Alone Any More?  Sure!  Why not?  Bring the reader of these expensive books even closer to the studio experience.
My only other gripe?  Volume 3 is still pretty under-represented, mostly (used and unused) promotional photos with a few quotes.
On the whole, though, the book effectively relays the fun these guys had making these records.  The entire book is pictures and quotes from the Wilburys (sans Bob Dylan) and "Sideburys."  Some of the quotes in it are priceless including one from Barbara Orbison.  She had an interesting bit about how flummoxed some reporters were when they tried to interview The Wilburys.

"I can see all the questions prepared over sleepless nights, the questions every interviewer always wanted to ask those guys but never could.  And they walked in and they saw five guys without a serious bone in their body.  They didn't want to talk about the music, they just wanted to talk about how they were interrelated!"

Go back and listen to/watch their vintage interviews, she's right!

#124 is pretty happy with the book, but he should probably spend another $10 for art collector white cloth gloves to thumb through it.
Posted by Jerry at 7:04 PM 9 comments:

For the record, my Wilbury book just arrived.  More when I get a chance to look through it... 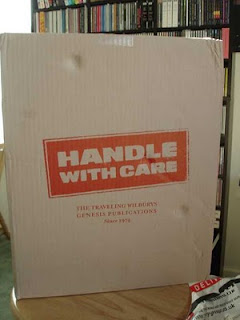 DURING THE SUPER BOWL

In case you missed it...