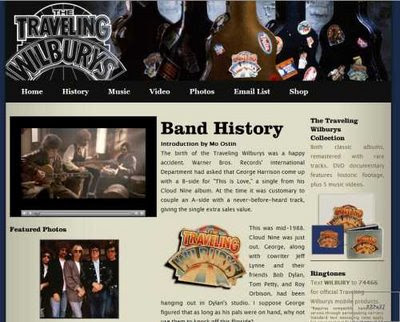 The Traveling Wilburys Official Website has just launched a redesign and while the content seems to have been shifted around a bit, the biggest addition appears to be a Traveling Wilburys shop with all sorts of items including Wilburys T-shirts, coffee mugs, glasses keychains and even a throw blanket.
Posted by Jerry at 7:25 AM 2 comments:

THE RETURN OF JULIANNA RAYE 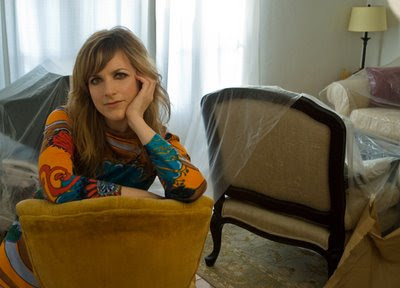 She turned out to be one of my favorite voices long after her Jeff Lynne-era: Julianna Raye.  Her web site has been transformed and her new CD titled Dominoes is almost ready to release.  It is a bossa nova collection produced by Ethan Johns, who produced her last disc Restless Night.
Something Peculiar (her first album and her only produced by Jeff Lynne) is, of course, a drastically different album than Restless Night.   But, I was surprised more ELO/related fans didn't follow Restless Night because it was a bit too dark and not pop.   I thoroughly enjoyed it, though.
See, there was a time in popular music when singing as if you had a fingernail ripped off was considered good.  I found wailing into the microphone like that absolutely ridiculous and still do.  Whenever you long for a unique voice who approaches their singing with style and substance, Julianna Raye completely fits the bill.
The thing is both Jeff Lynne and Ethan Johns captured all these little nuances in her voice and brought them out on record.  Plus, her writing is absolutely amazing and rather underrated.
Dominoes sounds like an enjoyable follow-up.  You can read more and hear clips of the album here.
Posted by Jerry at 9:11 AM 3 comments:

ELO's Discovery & Out Of The Blue remasters are about to be re-issued on Blu-spec CDs. As I understand it from reading this, there are fundamental jitters and vibrations when standard CDs are made. These new discs eliminate that. Doesn't say anything about the music having a higher resolution, though.
In any event, Discovery is set for a December 24 release and Out Of The Blue is expected on January 21, 2009. These will be Japan-only releases so far.
Correct me if I'm wrong, but I suspect Blu-spec CDs are almost the same thing as SHM-CDs (Super High Material CDs) only made by a different company.
Tom Petty's Full Moon Fever is being released on SHM-CD in early December. But, if it's not remastered by the artist, I would think the improvement would be miniscule for most people. It's the same CD sound only less jittery??
We'll see.
Posted by Jerry at 8:39 AM No comments: 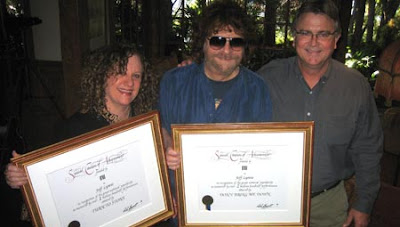 Jeff Lynne, as ELO's songwriter, was recently awarded two certificates from Broadcast Music, Inc.  One certifies that Turn To Stone has been played on the radio one million times, or a Million Airs, if you will.  The other certifies that Don't Bring Me Down has received two million airs. 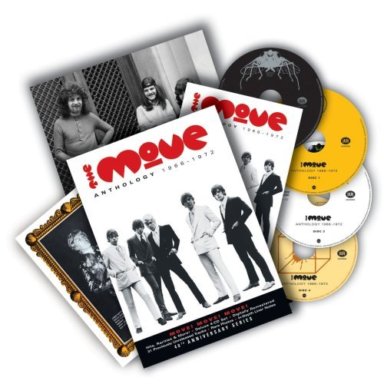 Behold the centerpiece of what's actually been a pretty decent restoration series for the Move.

As usual, when news of this box set broke, I filled my head with expectations about what could and should be on it. Then, I caught the track list weeks ago and it took a bit of the wind out of my sails. The Jeff Lynne years are treated as a "by the way..." era rather than half of the band's recorded LP career.
That leaves us with a new sense of what the bottom line is for this release: the box set is centered on Roy Wood's work with a rather nice tribute to Carl Wayne.
Bravo on the package: hardbound DVD sized fold-out. Poster, eh. Cards, ok. The liner notes/credits book: great! Well thought-out and amazingly desgined.
Now, to the content. Disc 1 is rock solid. Starting with the primitive gems, you coast through the early-period Move beautifully including a less refined version of Night of Fear. For me, the acoustic version; rough mix of Flowers In The Rain was the winner of disc 1.
Now to disc 2 when I start hitting a wall. I understand the value of these live recordings, but wouldn't having a separate Something Else from the Move release with bonus EP tracks be a better option instead of taking up more than an entire CD of a career anthology? The live material is enjoyable, but...
Disc 3 starts with two tracks we basically just heard from Disc 2 with some differences, then finally continues its journey through the Move catalog with a few more alternatives and rarities all marked with a red asterisk.
Then to disc 4 where the asterisks for all intents and purposes disappear. We get the nickel tour through the second half of the Move's recorded career. I mean, the set doesn't even touch Shazam until half way through disc 3. The Jeff Lynne era didn't stand a chance.
Overall, in terms of sound quality, I think they accomplished what they set out to do: restore the Move's recordings to top shelf quality so everyone can enjoy them again. In that sense, mission accomplished.
But then, there's some of the decisions I thought were a bit odd.
None of the discs run an hour. I thought the "... more than three hours of Move magnificence" was a typo. It's not.
I'm sorry, but I just can't get excited over shorter/edited/abridged versions of stuff we already have. Wouldn't edit versions work better for best-of's made for the masses?? If they like what they hear, they can pursue the full-length stuff. And wouldn't it give the dedicated fans more motivation to buy another "singles" collection?
A shortened Do Ya was favored over a shortened Feel Too Good?
One track from Message From The Country? One?!?
Never mind the lack of Jeff Lynne compositions here, there's not a single rarity or alternate from the Jeff Lynne era... period. Not one. Not a single new thing to hear.
That doesn't make this a bad box set as much as it makes it a really lopsided one.
Posted by Jerry at 5:52 PM 2 comments: