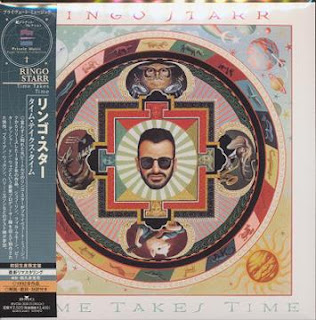 For those keeping score on Japanese card sleeve editions, Ringo Starr's 1993 CD Time Takes Time (with produced by Jeff Lynne titles) was also just released as a Mini-LP edition in Japan only.  It boasts JVC K2 24-bit remastering and does contain the Jeff Lynne-produced Don't Be Cruel as a bonus track.
Posted by Jerry at 6:22 PM 1 comment:

ANOTHER ONE SEES THE LIGHT... 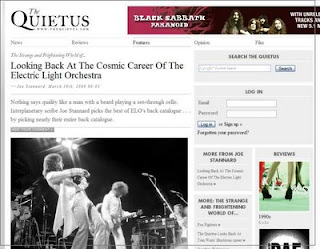 Here's an amusing article on ELO by columnist Joe Stannard.  Here's the set-up:

Amazon has Regina Spektor's new album "Far" listed for a June 2 release.
Posted by Jerry at 9:40 AM 1 comment: 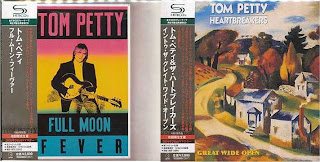 I'll be honest.  I'm not completely sure why I dig these Japanese paper sleeve editions so much, but I do.  The latest batch (related to Jeff Lynne's producing) comes from Tom Petty.  Full Moon Fever and Into The Great Wide Open were released in Japan last week on higher quality Super High Material CDs or SHM-CDs.
As mentioned previously, this is the first re-issue of any kind for Into The Great Wide Open.  On the downside, there's not much to it.  You get a plain lyric booklet and the sleeved plainly designed CD.  There was indeed a vinyl edition of this album, though not many were pressed.
Where this Mini-LP CD lacks in physical content, it gains in sound quality.  It's a definite improvement over the original CD, and it has nothing to do with SHM-CD format.  Although there's nothing in the credits to suggest it, the CD sounds remastered to me.  Maybe it's mentioned in Japanese, I don't know...
Geffen released a remastered Greatest Hits for Tom Petty last year.  The sound quality on the Mini-LP CDs pretty much matches that. 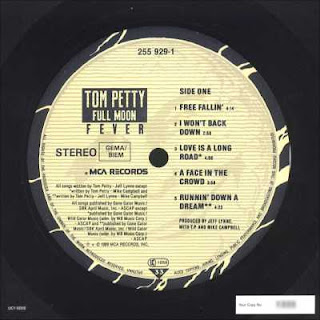 Now, to Full Moon Fever.  Quite simply, the sound quality blows the doors off of the original CD and even beats the MFSL Gold edition.  Again, nothing in the credits suggests it's remastered, but the sound is much stronger and some finer details are more prominent than before.
Funny, they never "officially" remastered this landmark CD and it was released 20 years ago next month.
The contents of the Full Moon Fever Mini-LP are much better and include the plainly designed disc, a replica of the original inner sleeve, a lyric booklet, and a numbered card certificate (pictured above) with an image of the original LP label. 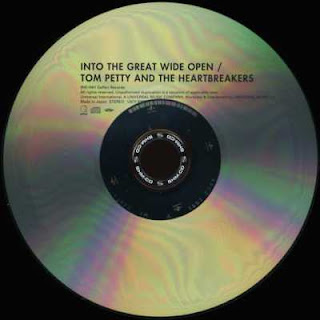 There are no bonus tracks on either CD.  Maybe that'll come with an official remastered edition down the road.  But in the meantime, these two albums sound totally rejuvenated and are worth revisiting again.
Posted by Jerry at 9:49 AM 1 comment:

AND THE GOLDEN NOTE GOES TO...

Jeff Lynne will be among the attendees at this year's ASCAP I Create Music Expo and while he's there, ASCAP will present him with the Golden Note Award for his outstanding contribution to music.
The expo takes place on April 23-25 at the Renaissance Hollywood Hotel in Los Angeles.
Another similar report from Variety.
Posted by Jerry at 7:30 PM No comments: 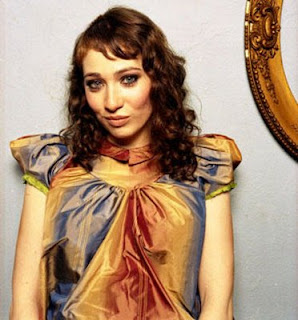 According to Strangeglue.com, Regina Spektor will release a new album called Far this June.  Jeff Lynne is reportedly one of the album's producers.
Another report from FMQB.

Here's the full Pitchfork article.  You have to click "more" at the bottom of the article to read the interview portion.
More as we find it.
Here's Regina Spektor's MySpace page for samples of her previous work.  And here's one of her cool videos.
Posted by Jerry at 3:44 PM 1 comment: 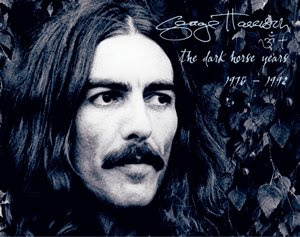 Here's an interesting blog entry from Yer Blogger about George Harrison's past and hopefully future remaster projects.  A career-spanning box set of Harrison's work is way overdue and will hopefully, if and when it arrives, fill in the many gaps left in his reissue series so far.
The Dark Horse remasters yielded decent remastered sound, but yielded little in bonus material.  Most CDs added just one bonus track.  Cloud Nine was the exception with two.  To add to the insult, the digital versions (released in 2007) made an additional bonus track available, but only if you bought the whole album again.  Lame decision.  You'll likely make more money offering those tracks individually.
The Dark Horse Years left off some key tracks including the studio version of the Jeff Lynne co-produced Cheer Down, but I'm guessing they'll be part of the longer-term plan if there's a box set.
Yer Blogger says of Cloud Nine:

1987's hit album "Cloud Nine" featured two bonus tracks, but excluded the silly (but still desirable) "extended" version of "When We Was Fab".

...which I think isn't desirable at all.  It was the last part of the track in reverse.  What would be better for a potential box set is a clean copy of Fab with a section that was ultimately cut out for the original LP.  At least that's something new to hear.  A bootleg with the unedited Fab also carries That's What It Takes with a different mix in the very beginning.  You can bet there are other unreleased "ideas" that are worth hearing.  If you're that invested into an artist that you'll buy an expensive box set, an extra (or different) verse isn't going to make or break a track... or the artist.
More from Yer Blogger, this time about the Wilburys re-issues:

The four bonus tracks included were all from the “Volume 3” era, but were split evenly between the two CD's. There were also some alternate mixes and edits, as well as one unreleased alternate take, that were saved for the vinyl release. These could have easily fit as bonus tracks on the collection.

I understand they want to keep the continuity of the original CDs, but I agree.  What little bonus material we got out of this was oddly placed and ultimately fan-deflating.  Even the jarring edit (1:55) in the otherwise excellent Maxine was getting to me after a while.
YB continues:

Curiously, there was also a different edit for the video of “Inside Out”, which was included on the DVD.

They were all re-edited except for Handle With Care, plus they were all cropped for widescreen.  Inside Out was such a disappointment because it had a lot of funny moments between the guys... most all were edited out.  They either had no choice but to re-edit them or they simply lost their minds.  The documentary is the only reason to own the DVD.
So, here's to looking forward to a possible Harrison box and here's hoping better decisions are made.  Yer Blogger will have some ideas in an upcoming post.
Posted by Jerry at 9:58 AM 1 comment:

REVIEW: THE VERY BEST OF THE MOVE 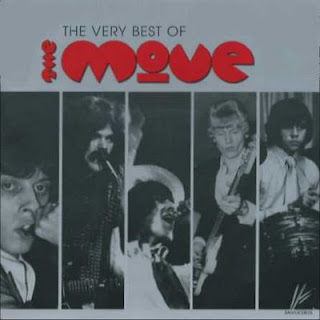 I have to admit, this is probably the first time I ever looked at a CD and was this amazed at how crammed full of material it is.  This new 25-track Move best-of comes from Salvo, the label that gave us the impressive (however somewhat unfulfilling for Jeff Lynne fans) restoration series of The Move's original LPs and career spanning box set.
Some highlights on The Very Best of The Move:
The Move can't claim as many comp CDs as ELO.  For that matter, neither can most bands.  But it's pretty safe to say you can stash away any old Move best-of's for good.
When you teach your friends Move 101, this is your textbook. 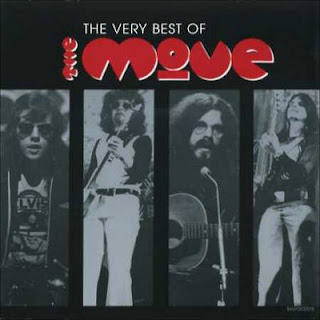 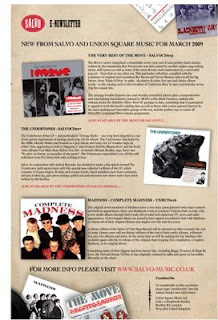 Salvo's latest newsletter is just out with info on the new Move best-of CD.  Interesting quote at the end of it's blurb, "...the perfect way to round off Salvo/Fly's acclaimed Move reissue programme."
Does that mean that's it for Move releases?  What about the proposed BBC and live discs?  Who will handle those, if anyone?  I thought Salvo seemed so keen on The Move.
That would probably explain why Disc 2 of the Move Anthology was all Marquee.  I thought the concert was worth "documenting" on CD, but as its own release.
Posted by Jerry at 9:10 PM 1 comment: 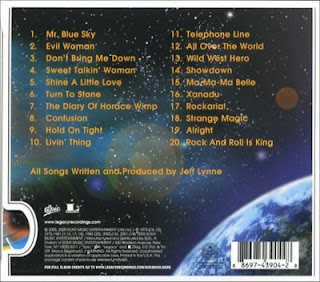 Quietly sneaking on to store shelves this week, a USA edition slider pack for All Over The World: The Very Best of Electric Light Orchestra.  There's a Fin Costello picture on Jeff on the inner flap (the UK edition has a generic star field) and a '78 concert tour pic under the disc.
If you find one this week at Best Buy, the price is $6.78...  it doesn't get much cheaper.
Also quiety out this week, the 5CD grouping of On The Third Day, Face The Music, A New World Record, Discovery and Time in the EU... as well as the new UK Move compilation on Salvo.
Posted by Jerry at 8:27 PM 1 comment: