There's early word that the new set of Sony Mini-LPs from ELO will be boxed together (all 9) in a hardbound box with Disvoery artwork... Stay tuned. They're due out in Japan March 14.

I'm listening to this collection of Mark Ronson productions.  Ronson's stock as a record producer has skyrocketed with his win for Amy Winehouse's Rehab.  This collection, which I highly recommend, has him teamed up with several other artists as well as "solo" tracks.

It, of course, got me to thinking if a similar CD by Jeff Lynne would make for a viable release.  The Rossif Sutherland tracks (which have yet to be released) would be a good feature as well as other artists Jeff has worked or would like to work.  Then, for good measure, weave in some new solo Jeff Lynne tracks, maybe an instrumental... and boom!... new music from Jeff and perhaps some support for other artists' tracks he produces.  Many ELO fans never really jumped on board his productions outside of ELO, which is a bit of a shame.  Hard to believe, but Zoom is seven years old this spring.

I was just wondering if anyone in Jeff's camp ever considered such a thing.

There's a second pressing of the Japanese Mini-LP CDs from ELO coming March 14.  They're available for pre-order, but no word on whether there will be any differences with them.  These second editions will be for On The Third Day through Balance Of Power sans Xanadu and Long Beach.

Also, on April 1, it appears Ole ELO may be re-issued by Sony.  Another pre-order link here.  At $6.99 retail, it looks like they're going all out on this one.

For those not in the know, Ole ELO was a nice compilation album from 1976 with tracks from the group's first 5 albums.  Some LPs had all full length songs, other editions had a few edited versions.

Oddly enough, this LP spawned some of the most cherished collectibles for ELO fans.  A version on gold vinyl and promo-only cover is rare but easy to find with some digging.  However, in honor of the USA's bi-centennial year in 1976, three other promo-only versions of Ole ELO were pressed: one on red vinyl, one on white vinyl and one on blue vinyl.  Those three are extremely rare and valuable.

AND THE GRAMMY GOES TO...

It's unrelated, I know.  But, I have to hand it to a good friend who predicted big things for Amy Winehouse a year ago when she was practically unknown, especially in the USA.  While vacationing in Mexico last March, my friend gave me his iPod and said, "listen to this..." and told me the story (true or not) about how Winehouse's label wouldn't release Back To Black until she went to rehab.  She then wrote Rehab.  The song instantly clicked with me and I spent the subsequent six months listening to that CD almost exclusively.

Then last night, after months of seeing a very wild life played out in public, she gets on stage in London, sings two songs that perfectly encapsulate her (& her turbulence)and afterwards, Rehab wins the Record of the Year Grammy.  Now, that's poetry from arguably the most fascinating figure in pop music in a long time.

Other than that, the Beatles tribute was wonderful and it was great to the Beatles' Love pick up 2 statues.  George Martin's gesture to pull Ringo up to the stage with him and his son was nice, but Ringo spent a little too much time at the mic.

TICKET TO THE SAME 'OL PLACE 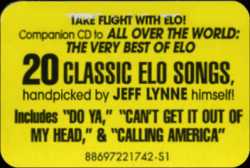 Indeed, Ticket To The Moon landed in retail shops stateside today.  Besides a smaller and bolder font on the back insert and spine, nothing new to report from my previous review of this disc.  The set is also available on iTunes.

I'm frankly not sure how releases work in the few shops we can actually buy CDs anymore.  But my local Borders was already carrying the UK import of Ticket To The Moon, so they were not carrying the USA edition released today.  While stocking the import makes for a better CD retailer, I would think that's a downside to staggering worldwide release days.

So, long story short, unless you're a collector, I'd just buy the remastered albums.  They're much easier to listen to than having Eldorado cut & pasted between two 80s tracks.

TICKET TO THE MOON

Just a reminder (as the Honda commercials featuring Hold On Tight have started airing again) Ticket To The Moon: The Very Best of Electric Light Orchestra Vol. 2 is in USA stores tomorrow.  It should be in wide release, but it's also available in the FTM Shop with a bonus postcard.

I have to admit, it was an amazing half-time show for Tom Petty & The Heartbreakers.  Three songs from Full Moon Fever was a surprise.

It was one of the more entertaining parts of the evening until an actual football game broke out in the 4th Quarter.

CARE TO MAKE A WAGER?

The New England Patriots may be 12-point favorites in Super Bowl XLII, but apparently the odds Tom Petty will open the half-time show with Free Fallin' are 3:1...