(UPDATE: 1888 Media apparently removed their Concert For George content.  I amended the posting to take out the missing images.)


A reminder, Concert For George is out on Blu-Ray this week.  Thanks to Rob at 1888 Media for sharing some press materials for this week's release.  Enjoy. 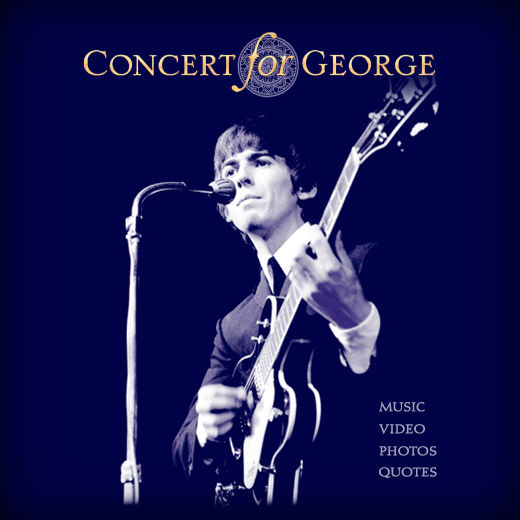 
Los Angeles, CA— CONCERT FOR GEORGE, the legendary tribute concert in honor of GEORGE HARRISON, will be released for the first time ever on Blu-ray on March 22. Originally released in High Definition, the CONCERT FOR GEORGE 2-disc Blu-ray will include the complete concert on the first disc, with a second disc containing the original theatrical version featuring concert highlights, interviews with the performers, rehearsals, and behind-the-scenes footage. The second disc will also include a previously unreleased interview segment entitled “Drummers,” featuring Ringo Starr, Jim Keltner and Ray Cooper.

CONCERT FOR GEORGE has been certified 8 times platinum by the RIAA since its initial release as a 2DVD set in November 2003 and earned a 2004 Grammy® Award for Best Long Form Music Video.

Directed by David Leland (whose credits include the feature Wish You Were Here, HBO’s Band Of Brothers and the Traveling Wilburys video “Handle With Care”), CONCERT FOR GEORGE captures stunning renditions of some of the most significant music of the 20th century, including “While My Guitar Gently Weeps” (featuring Clapton on guitar, McCartney on piano and Starr on drums), “Taxman” (performed by Tom Petty and the Heartbreakers) and “The Inner Light” (covered by Jeff Lynne and Anoushka Shankar). Lynne, Harrison’s longtime friend and collaborator, produced the audio elements of the concert, while Clapton oversaw the entire proceedings as Musical Director.

Purchase links for Amazon US  and Amazon UK ...
Posted by Jerry at 8:31 PM