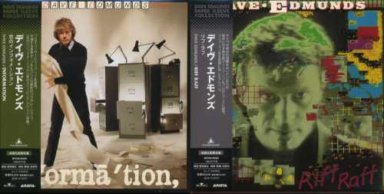 The new Dave Edmunds Mini-LP collection is out now including two of his albums with some help from Jeff Lynne.  Information (from 1983) and Riff Raff (from 1984 and a rarity on CD) have joined a growing list of paper sleeve collection CDs.

The remastering has me a bit perplexed, though.  Remember, both CDs were remastered and re-issued on BGO in 2002 with excellent results.  These new CDs however are much louder and powerful (and sweetened for lack a better descriptor.)  While I think some people will prefer the sound of these, I'm beginning to see why "flatter" is a bit better in this case.  The new CDs just blast through the headphones (a good thing) but I'm detecting parts where the fine little details are getting crushed and buried.

I have yet to give them a spin on the main stereo, though.  We'll see how they fare there.

Outside of that, the paper sleeves are beautifuly made.  However, the two Edmunds CDs I got contained only the album cover with CD and black and white lyric booklet inside.  That's it.  ELO, as you may or may not know, made out much better than that.

And no matter how good the remastering, I still, to this day, can't make out the first 6 syllables of Breaking Out.