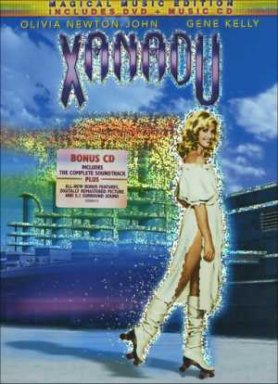 Xanadu: Magical Music Edition is in stores beginning today and as promised the sound and picture quality has been substantially improved.  So, all of that glitz and camp is more pronounced than ever before.

The bonus soundtrack CD is the current USA edition on MCA, so they didn't throw the fans a bone there.

The Going Back To Xanadu feature is admittedly a bit fun.  A few observations from that: ELO is mentioned just once, the whole bit about the lengths they went through for the customes was interesting, (in addition to the director, producers and other major crew members,) they interviewed several of the dancers and two muses, 2 of the Tubes turned up, Michael Beck wasn't even mentioned by name, Olivia apparently declined to be interviewed, and holy shit, Thaaattt's Gene Kelly's widow?!!?!

Whether it's hated or love for its campiness. Xanadu was the movie that got me into ELO. It's such a shame though that more extras weren't included.

But that would've jacked the price up more.