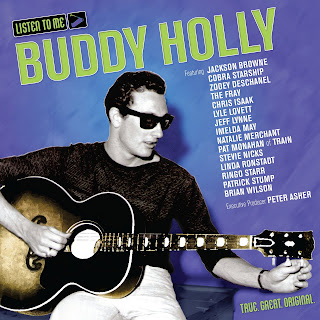 An announcement we've been seemingly waiting ages for is official as of today.  A collection of Buddy Holly cover songs called Listen To Me: Buddy Holly will be released on September 6, just in time to celebrate Buddy's 75th birthday.  Jeff Lynne has contributed (and produced) a cover of Words Of Love for the set.

A new web site has launched in preparation for the release... as well as a press video giving us a short preview of some of the tracks including Words Of Love.

Listen To Me: Buddy Holly will be available as a CD and a digital download. The Listen To Me series will benefit music industry charities geared towards young, up and coming musicians.

This will be the first studio recording under the Jeff Lynne banner since 1991.
Posted by Jerry at 7:17 PM