LIVING IN THE MATERIAL WORLD 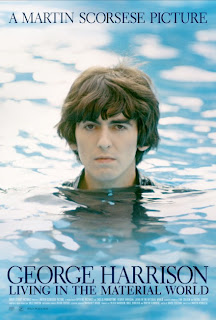 GeorgeHarrison.com has taken the wraps off the new Martin Scorsese documentary about George's life, Living In The Material World.

If you are in the UK, good news for you.  The film will be released in 3 configurations: DVD, DVD/Blu-Ray Combo pack, and a deluxe edition featuring the DVD, Blu-Ray disc and a CD of unheard material.  Release date: 10 October 2011.

If you're in the US, the film will debut in two parts on HBO on October 5th and 6th.

Although today's press release doesn't mention Jeff Lynne by name, I can't imagine he's not part of it in some form or fashion.

This is just how the film will debut, but plenty of questions remain.  When will the USA get a DVD/Blu-Ray release... and what's on that CD?  Stay tuned.

A companion book will help usher in the film.  Expected UK Release date for that September 3, September 15 for the USA.
Posted by Jerry at 9:01 AM

I absolutely love this CD! My favorite track is And Winter Came. Next would be Trains and Winter Rains. The others are phenomenal as well. An earlier post stated this CD has a feel of cynical commercialism. If you go to her web site and listen to her explanation of this CD she states she wanted to do a more modern take on Christmas carols. Now days unfortunately commercialism at Christmas time is just about every where you turn. The only grievance I have with this CD is I miss when in her earlier work she would blend her native Celtic tongue with English and this CD is predominately English. Other than that I would definitely call this CD a winner!