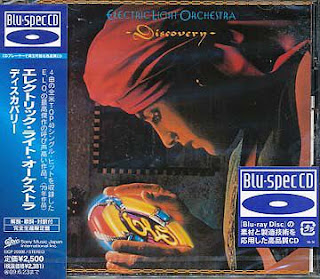 I'm trying to form an opinion on the new Blu-Spec format.  Discovery is the first ELO CD to undergo this treatment with Out of the Blue to follow later this month.
I really want to learn what constitutes the "best sound" possible.  But then the argument over analog's warmness over digital's clarity ensues and I'm not sure what to think.  I tend to prefer digital's clarity especially if we're talking remastered CDs.
So here we are with Discovery.  I tried side by side comparisons two ways: 1) over the stereo speakers using a Blu Ray player coax connection vs. the CD player analog connection and 2) over the iPod using uncompressed AIFF files.
On the loudpeakers, the original remastered CD sounded louder and a bit harsher (but OK) compared to the Blu-spec.  The high end seems reined in a bit on Blu Spec and one can assume when that happens you can hear the finer details in between.
On the iPod, the only major difference I can detect (using Little Town Flirt as an example) was a fuller bottom.  Again, the highest parts are solidly there but more controlled. It all didn't seem that much more "stable" but in the end, I would give the Blu-spec a slight edge.
I suspect since it's the same master used for both discs, the difference won't be that much for most people.  As much as I'd like to spend thousands of dollars in upscale audio equipment, I can't.  But I'd still be eager to learn what makes something sound great.  How can you tell if you have a good ear and how can you train it to be better?
So, long story short: the more picky you are about the sound of the music you listen to, the more a Blu-spec CD may a fit for you.  Otherwise, the remastered CD will suit the non-picky just fine.
Posted by Jerry at 1:04 PM

thx for the review,uhg,been saving my money for the japanese mini box sets, how is the quality on those?and now this comes along lol!,cocteau twins would prob sound wonderful in this format,even though the robin guthrie remasters sound great

The sound quality on the Mini-LP box sets are exactly those of their most recent remasters: very good! I wasn't shy about how cool I find them, I love 'em! Even if just for the cool labels on the CDs... but sound quality matches the remasters.

I'm waiting for FTM to find the next set of improved master tapes.

I just wish we could get a separate release of all the unreleased material, instead of nickel-and-diming us on endless future releases with 1 or 2 new songs.

I see that may be in the works for the future, and I'd be happy to purchase it!

Hi, i'm Jan from germany. I've bought all the japanese Mini-LP's from ELO. I have also the 24k Gold pressed Mastersound "Discovery" & "Face the Music. But nothing beats the Blu-Spec. Absolutely nothing. If you think it does not, you don't hear all of the sound of the cd. The Problem is, you must have a very good drive for listening cd's. Buy the Blu-spec's and wait till you can get a better player with a better drive like the
Philips CD2-Pro. Then you can hear cd's how they realy are. Look at musical fidelity.

thanks jan and jerry for the replys!-cory E.

Thanks Rich... I'm concerned that it says out of print on the order, but I'm pretty sure that's an error. Something similar happened with the Blu Spec Discovery...

I'm an electronic technician who serviced many SONY CD and DVD players and I can say without a doubt that Blu Spec CD is nothing more than marketing gimmick to squeeze more money out of fans. For a Blu Spec CD to play on a standard CD player it must adhere to SONY/Philips RED Book standard. There can be no audible difference. Any difference perceived has to come from remastering of the original recording and not the playback of a better manufactured CD.

Agreed and I'm all for believing that it's probable that record companies are trying to get more money out of people, but on a BluRay player, there is a slight improvement. Probably not enough for most people to drop everything they have. It's the exact same master, I know. But I do think it's possible that a better or new format can offer cleaner results.

I'm not ruling out that I'm easily suckered either. ;-)

If you playback CD's on a Blu Ray player chances are you will perceive improved playback quality due to a higher quality DAC (Digital To Analog Converter) in the Blu Ray player. High quality DAC's will always sound better than the run of the mill DAC's in standard CD or DVD players and in some low end receivers. To get the highest quality audio playback you want the best DAC, the best preamp and power amp. However the number one determiner of audio playback quality is your speakers. Instead of investing all the money on Blu Spec CD's you're better off investing in better speakers! Remember everyone tastes differ. Besides Blu Spec CD's may just become collector's items.