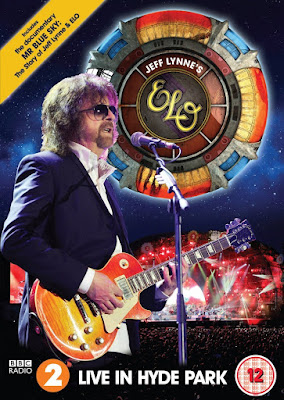 So, it appears the North American edition of Jeff Lynne's ELO Live In Hyde Park has suffered the same fate of ELO Live- The Early Years from Eagle Rock; Roll Over Beethoven is edited out.  If you want the full concert, it looks like you have to buy the UK edition.

Also, the only digital versions we've been able to find is from iTunes.  Live in Hyde Park (again with ROB edited out from the North American version) and Mr. Blue Sky are separate titles available to download.
Posted by Jerry at 6:03 PM

Can anyone confirm that Eagle Vision's UK pressing is region free?

I received an e-mail response back from Eagle Vision UK and they are saying the UK pressing is region-free, so US fans can order from Amazon UK (or other UK retailers). It's worth the extra few bucks (right now it's under $25 including shipping from the UK to the US) to get the full show.

Received the UK pressing a few days ago, and it indeed is playable in my US Blu-ray player, and does indeed include "Roll Over Beethoven." I also believe the edit of the "Mr. Blue Sky" doc on this Blu-ray is longer than what Palladia aired back in 2012 in the US. (Probably the same edit that was for sale on iTunes for quite some time).

One other random question concerning the documentary: At one point, they play a little bit of Roy's "A Love So Beautiful" and it sounds like a different mix. Do you know of any alternate mixes for this song? A video mix perhaps? (Did they make a video for that song?)