MORE FROM THE MOVE (CONTINUED)

It appears the wait will be short for the rest of the Move remasters; pre-orders are now appearing for Looking On (the first Move album featuring Jeff Lynne) and an expanded Something Else from The Move EP.

First Looking On, featuring a track many of us hoped would appear. 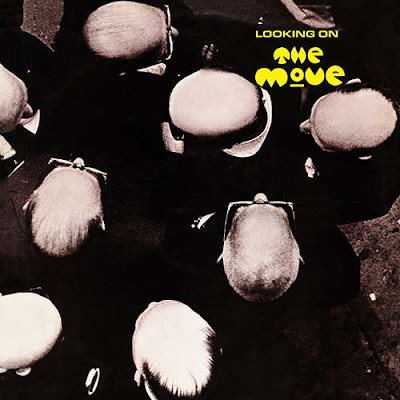 From the pre-order at Cherry Red Records:

Esoteric Recordings are proud to announce the release of a newly re-mastered and expanded edition of the classic 1970 album by THE MOVE, “Looking On”. Of all of the groups to emerge in Britain in the latter half of the 1960s, THE MOVE was arguably one of the finest. A powerful act on stage, the group were blessed with one of the most imaginative songwriters of his generation in Roy Wood. Of all the Move albums, “Looking On” is probably the most experimental and progressive in its structure.
The departure of vocalist Carl Wayne in early 1970 and the arrival of Jeff Lynne in the ranks (from the acclaimed Idle Race) saw The Move take flight in previously unimagined ways. Lynne’s compositional skills perfectly complimented Roy Wood’s with his expansive track ‘What?’, whilst Wood excelled himself on the album’s title track and ‘Feel Too Good’, along with the singles ‘Brontosaurus’ and ‘When Alice Comes Back to the Farm’.

Newly re-mastered, this 2 CD Deluxe edition of “Looking On” has also been expanded to include 14 bonus tracks encompassing the single B-side ‘Lightnin’ Never Strikes Twice’, alternate mixes, and seven tracks and two interviews recorded for the BBC in 1970, all of which appear on CD for the first time. This expanded deluxe edition also includes a lavishly illustrated booklet that fully restores the original album artwork and features a new essay by Mark Paytress and also includes a poster.

DISC ONE: “LOOKING ON”
RE-MASTERED
1. LOOKING ON
2. TURKISH TRAM CONDUCTOR BLUES
3. WHAT?
4. WHEN ALICE COMES BACK TO THE FARM
5. OPEN UP SAID THE WORLD AT THE DOOR
6. BRONTOSAURUS
7. FEEL TOO GOOD
BONUS TRACK
8. LIGHTNIN’ NEVER STRIKES TWICE

and, Something Else - pre-order from Cherry Red Records: 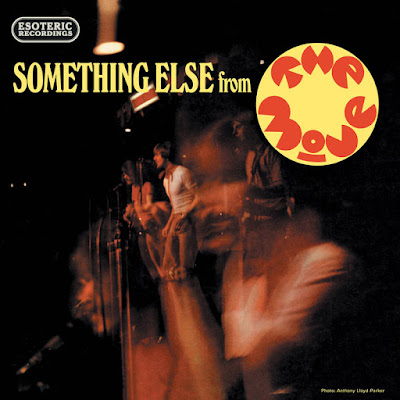 Esoteric Recordings are proud to announce the release of a newly expanded and re-mastered edition of the classic 1968 live recordings made by THE MOVE at the legendary Marquee Club in London. Of all of the groups to emerge in Britain in the latter half of the 1960s, THE MOVE was arguably one of the finest. A powerful act on stage, the group was blessed with one of the most imaginative songwriters of his generation in Roy Wood.

On 27th February 1968 the Move staged a concert at The Marquee Club with the intention of recording the concert for release as a live record. Due to technical issues, some of the material recorded was deemed to be unsuitable for release. In an attempt to rectify this, a further concert at The Marquee was recorded on 5th May. In the period between the first and second concert, Chris “Ace” Kefford had departed the fold, with guitarist Trevor Burton assuming bass guitar duties. After some repair work on five tracks, a seven-inch EP (playing at 33 rpm) was issued in June 1968 under the title “Something Else from The Move”.

In 2007 the original multi-track master tapes were re-mixed and pieced together to present as full a record of The Move’s Marquee performances as possible. Now these stereo tracks are gathered, along with the five mono mixes that formed the original 1968 EP on a CD version of “Something Else from the Move”. The release is newly presented in a single digi-pack with illustrated booklet and liner notes.

BONUS TRACKS
“SOMETHING ELSE FROM THE MOVE”
THE ORIGINAL MONO EP REMASTERED
13. SO YOU WANT TO BE A ROCK AND ROLL STAR
14. STEPHANIE KNOWS WHO
15. SOMETHIN’ ELSE
16. IT’LL BE ME
17. SUNSHINE HELP ME